India added the 2013 Champions Trophy to the 2002 trophy they shared with Sri Lanka, beating England narrowly by 5 runs in a game that was there for the hosts to win. With this win, MS Dhoni became the first captain in the world to have won all ICC trophies. Under Dhoni's captaincy, India had earlier won the inaugural ICC World Twenty20 held in South Africa in September 2007 and the 2011 World Cup held in India, Sri Lanka, and Bangladesh. Chasing a modest 130 for a win, Ravi Bopara (30) and Eoin Morgan (33) had things under control and was going for the kill when Ishant Sharma turned it around with two wickets in two balls, after a six and two wide balls in the 18th over. That started a collapse that saw four wickets lost for three runs in eight balls. England finished on 124/8 after James Tredwell missed the last ball of the innings with six required for victory.Earlier Kohli top-scored for India with 43, rescuing the team's innings when it was in danger of unraveling on 66/5 after 13 overs. Dhawan, who went into the final as the tournament's leading scorer with 332 runs in four matches, hit 31 of 24 balls that included a six over third-man against Broad. Man-of-match Ravindra Jadeja remained unbeaten on a 25-ball 33, before returning to take 2-24. He was also given the 'golden ball' for picking the most number of wickets, 12, in the tournament. Explosive left-handed batsman Shikhar Dhawan won the 'golden bat' for scoring the most runs - 363 from five matches at an average of 90.75. He hit two centuries and a half-century with a highest of 114. 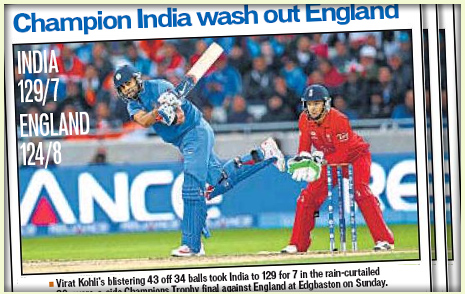