The ICC Champions Trophy, also known as the Mini World Cup, is cricket's one-day international tournament second in importance only to the Cricket World Cup. It was inaugurated as the ICC Knock Out tournament in 1998 and has been played every two years since, changing its name to the Champions Trophy in 2002. All ten full members of the International Cricket Council (ICC) take part, together with (for the first four competitions) two associate members. Since the quadrennial Cricket World Cup and on-going ICC ODI Championship effectively determine the relative rankings of international cricket teams in one-day international cricket, there seems to be little need for the Champions Trophy as a junior tournament. However, the Champions Trophy is a financially important event for the ICC. Money generated through the event is used in ICC's Development Program. Although being the second most important one-day tournament in cricket, the ICC Champions Trophy has sometimes been criticised by the media, with claims that there is no point for it, when there is the World Cup as well. Before the 2004 tournament, Wisden described it as "the tournament that veers between being the second most important in world cricket and a ludicrous waste of time". However, despite this controversy, many people are still fond of the tournament, and players enjoy having the opportunity to participate in it. 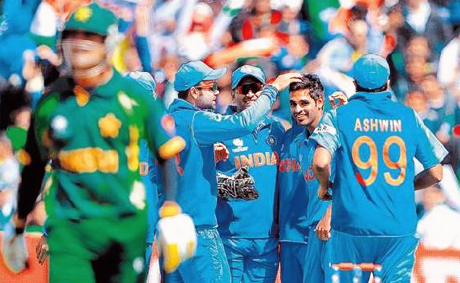 Australia have have become the first team to win the ICC Champions Trophy title twice, beating New Zealand by six wickets in the final at SuperSport Park. Chasing New Zealand's 200/9, Opener Shane Watson hit his second successive unbeaten century (105) to guide defending champions to a six-wicket victory with 28 balls remaining. Earlier, electing to bat, opener Martin Guptill (40), Neil Broom (37), James Franklin (33) and Aaron Redmond (26) were the only New Zealand bastmen to pass the 20-run mark. Watson was named man of the match, Ponting the player of the tournament, while South Africa's Wayne Parnell was the leading wicket taker with 11 scalps.
Australia's players will now head home for a short break before they depart for India, where they will play seven one-dayers against Mahendra Singh Dhoni's side, while a number of the New Zealand team will travel to India to compete in the Champions League Twenty20 competition.

The 2008 Champions Trophy which was due to take place in Pakistan in September 2008 and postponed over security fears, has been moved to South Africa by the International Cricket Council.
Index| Groups & Schedule | Teams | Results | Venues | Live Telecast

South Africa will be the host for the 2009 ICC Champions Trophy for cricket. The tournament features eight national test cricket teams competing in One Day Internationals. The games will be conducted in Wanderers Stadium, Johannesburg and SuperSport Park, Pretoria. 15 matches will be played in 14 days from September 22 to October 5, 2009 at the Centurion and Wanderers.